From Tech-Labs to Living-Lab

From Tech-Labs to Living-Lab: How is vCare concretely implementing its Participatory Design?

The first two phases of the participatory design are rather classical as they require a research of the State of the art and an detailed analsyis of the requirements. Wihin vCare this has been possible thanks to a deep involvement of all the clinical partners: They had to agree on a representation of the use cases and the associated functional and non functional requirements on which the technical partners could rely. The first challenge is thus to make sure that the clinical requirements are fully understood by the technical partners and that the solution proposed adresses real and objectised medical needs. The patients are here not directly involved but the presence of clinical partners with a long experience and a high motivation is a essential success factor.For the clinical teams involved in the project, vCare is not a side activitry but a real priority. 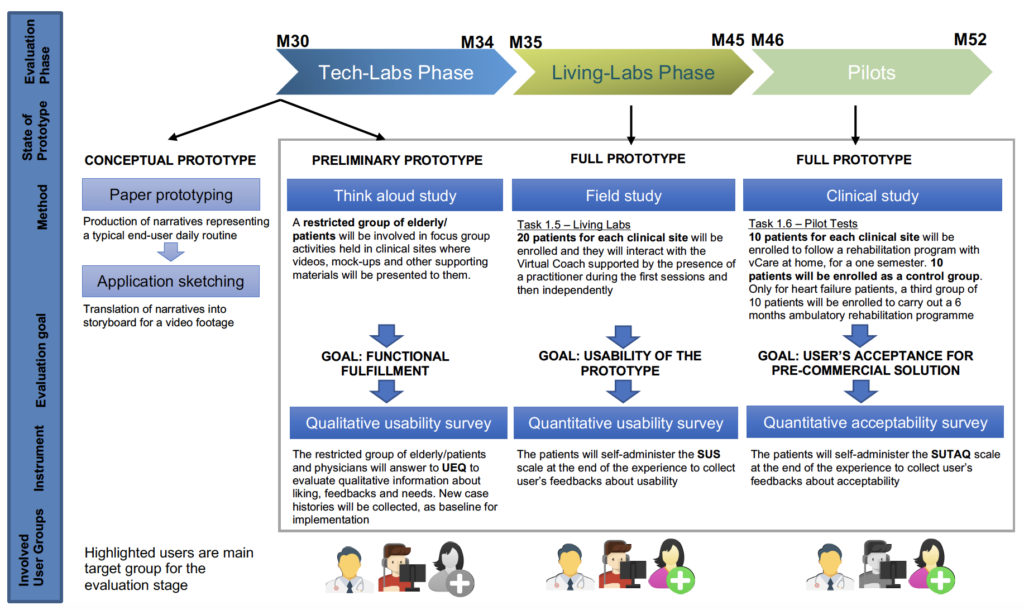 Once that all the necessary technical components have been identified, adapted and developed, the Tech lab phase (see our dedicated article) can be initiated. All the requirements have been translated into technical tests: Those tests must then be reviewed by the clinical partners before and after they have been cmpleted. It provides a further guaranty that all parties understand exactly how the solution will work. The necessary corrections can thus be made early: certain requirements can be added, modified or cancelled. vCare has now completed this phase.

The phase which follows- the Living Lab Phase- is still a test phase. But this time with the active involvement of the patients. The focus is here mainly on the utility and efficacy of the system and its capability to adapt to the patients’ characteristics and needs. The aim of this phase of the study is, indeed, to proceed with the validation of the functioning of the digital platform in a step-by-step process, testing its interaction with the patient, its adaptation abilities and the proposed services, taking into account the patient’s opinion.

How are the patients initially selected and informed?

For each targeted pathology, vCare has defined inclusion and exclusion criteria. The patients with very complex clinical case, unstable situation or major cognitive impairment have been excluded. Only patients aged of 65+ are selected. The subjects who match the medical and non-medical criteria are first of all required to watch a video produced by each clinical site. This video features a real patient in its interaction with the vCare system in the context of an ordinary week. It which should allow each patient to concretely project himself into the different situations described.

The purpose here is double: Provide a first very concrete level of information for a possible enrolment and collect initial feed-back.

A first global but critical feed-back

Each patient is asked to complete a User Experience Questionnaire (UEQ) meant to measure the user’s feelings, impressions, and attitudes that arise after this first level of information. Healthy elderly will also be included in order to integrate feedbacks of future potential end-users and analyse if the clinical condition makes a difference in the perception of the added value of the solution.

Both classical usability aspects (efficiency, perspicuity, dependability) and user experience aspects (originality, stimulation) are measured. The questionnaire consists of pairs of contrasting attributes that may apply to the product for which the user has to express his (dis)agreement with. While answering the questionnaire, the patients are supported by the physiotherapist who remains neutral but when the patients expresses negative impressions, he asks the motivation behind it and annotates the feedbacks.  All the different scores and the feedbacks are then analysed in depth and the results are shared with the technical partners: The summary document provides a first global but critical evaluation which then allow in order to prepare the next stage of the Living Lab Phase.

A comprehensive test in a controlled environment

The Living-Lab per se can be described as a “physical space” that recreates the user’s usual living environment with the aim to observe the user’s interaction with technological solutions during the routine activities and in real life situations. 80 patients selected in the 4 different clinical sites will first of all be trained to understand and use the solution by a multidisciplinary team composed of Physicians, Physiotherapists, Bioengineer and Neuropsychologist operating inside the hospital and perfectly tuned with the system functioning.

Every patient, on the basis of his/her clinical needs and personal profile, is prescribed a number of activities. He then accomplishes a series of daily living scenarios defined in specific “Use Cases”. Those “Use Cases”, in form of specific sessions, will be accomplished by every patient throughout 4 weeks. Each patient performs the sessions daily for 5 days each week.

A supplementary refinement has been introduced: During the first two weeks, the patient is asked to perform only the sequence of functionalities foreseen by the activity under testing but in the last two weeks he is left free to interact with the system the way he wants. We thus have the guarantee that all activities will be tested while also collecting valuable (and probably unexpected) feed-back on the system overall.

After each interaction between the patient and vCare system (supported by the presence of a practitioner at first, and then independently), we collect through a dedicated System Usability Scale (SUS) questionnaire the feed-back of the patient. This questionnaire consists of a 10 items questionnaire with five response options for respondents. Il allows with a very high reliability to identify the usability problems spotted by the user. VCare will thus be able to proceed, if necessary, to the adaptation of some components of the solution accordingly.

During this phase, the clinical sites will be continuously interacting with the technical partners. Quantitative and qualitative information is continuously summarized and supports monthly calls with the technical partners. Change requests are then elaborated and new releases of the software’s (supported by agile methodology) are regularly introduced. Furthermore, new emerging issues are discussed with all involved partners and operational decisions are taken.

At the end of the Living-Lab phase, vCare should thus have reached a level of usability and robustness which will allow the evaluation phase to be performed at home in the best possible conditions. And thus, to focus on the major expected outputs of vCare: Increased treatment adherence for better outcomes and much improved quality of life.

But even in this final phase, user involvement will be privileged. The Service User Technology Acceptability Questionnaire (SUTAQ) will be administrated to the 40 patients who will participate in the pilots during a six months period. This crucial information will then become the baseline for the launch of a new potential Participatory Design, focused this time on a pre-commercial solution.